skip to main | skip to sidebar

A busy day... with a photoshoot at St Nicks at 11am and then a meeting at 3.30 to sort out a Transition talk next Tuesday, a possible 'Flashmob/Freeze' fun event at 5 or 5.30 and then the York Rotters 5th Birthday Party at 7pm, plus at sometime delivering my unicycles to David, who is doing some driving for me tomorrow.
However, the day didn't work out quite as planned, but it was fine nevertheless. I arrived at St Nicks for 11am and there was a seeming lack of hurry... the event had been moved to 12 midday til 1pm, with the 11am photoshoot at 12.30. And I hadn't expected lunch to be provided. So I rang Gill and explained. Whilst I was waiting for the others to arrive, a potential volunteer turned up, so Ivana took his details and I gave him, his brother and mother a quick tour of the centre and nature reserve.
Birthday lunch was good... I can hardly believe it's been 5 years since I started York Rotters. But I've enjoyed almost every minute of my involvement with them, and am proud and perhaps a bit amazed how successful the group has been. So, sandwiches and cake... a professionally made cake in Rotters Red, with the logo on the top and some tiny vegetables strewn around the base made from icing. A very pretty cake, but the cake inside was boring. The company was great, though. Good to see Jo, York's second-most enthusiastic composter, and Kate Lock who wrote about composting in her book Confessions of an Eco-Shopper (companion blog here) and several other of the keener 'daytime' Rotters. (see the night-time lot this evening!) I was pleased to see my first glimpse of Robin's 'solar pod', a mobile demonstration unit showing how solar hot water works. This got photographed by the Press as well as the Rotters with cake. I left soon after 1pm.
I came home and did some washing up and then emailed David to see if I could deliver the unicycles to him on the way down to see Peter. He said yes, so I did. I went to Peter's to sort out our forthcoming presentation to the Fulford Women's Institute. Dot had lent a projector, Peter had found a copy of 'A farm for the Future' and had sorted out a 12 minute chunk of it to play. I took my laptop and we plugged it all together, played with assorted buttons until it all seemed to work. We also worked out what we were going to say before and after the film clip, and how this Transition event was going to work.
Before I left Peter's I had a look at his various squash plants, which were doing well. Then home via Country Fresh, where Richard explained about the forthcoming refit and some changes in the shop and the compostables collection. But good changes, which will make the whole process a little bit more streamlined and easy to operate.
There was no time for the flashmob thing.
Home and Gill had finished the cake! It was brilliant! 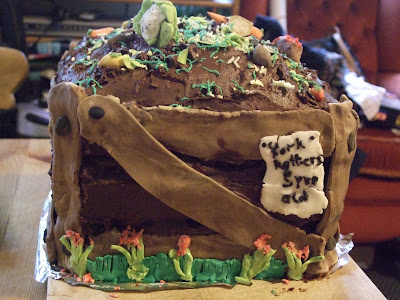 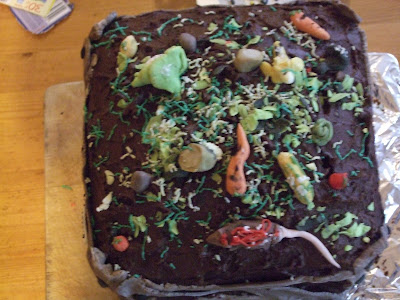 However, it was so big and heavy (18 eggs, 1kg flour 1kg sugar plus cocoa powder and rape-seed oil PLUS the icing!) that I said I didn't know how I could safely get it to the Environment Centre using my bike, so I rang up and Catherine came round in her car and picked it up.
I followed an hour later on my bike, with dried fruit, and looking forward to a good birthday party. The event wasn't that well attended, although those who did were 'top quality Rotters'!
One of the first people to turn up was Lynne a North Yorkshire Rotter, whom I met when I did their initial training session about 3 years ago. Then Helen M., the NYCC officer in charge of North Yorkshire Rotters arrived, with her partner, Mike, whom I got on very well with. There were of course a fair sprinkling of the more local Rotters, including Robin, who practically lives at St Nicks, Catherine, Chris, Pat, and others I've forgotten as it's now late and I'm tipsy. Yes I did have a few glasses of perry, plus sandwiches and a slice of Gill's cake which was lovely! But it didn't go on too long, and I was home for 10pm.
Posted by Compost John at 18:44

Excellent cake last night! Big pat on the back to Gill.

Weather forecast starting to look a little better for Green Fest tomorrow. Solar Pod may yet make some water warm!!

Translate this blog into your own language

Compost John
I am a very enthusiastic 'green' and am involved in a range of projects and community groups which are directly connected with sustainability. These include the Green Party, York in Transition, St Nicholas Fields , Frack-Free York, The World Naked Bike Ride, Alternatives to Violence Project, and others. . . . . . . . . . I am happily married with two children, and am unconventional and a free thinker, with a very tolerant wife! . . . . . . . . . I work as an entertainer, 'Professor Fiddlesticks' teaching circus skills and making people happy, since 1992. see wwww.professorfiddlesticks.co.uk . . . . . . . . A few years ago, I wrote a blog and column for Community Care, see www.communitycare.co.uk/blogs/green-living/ . . . . . . . .... In early 2010 I was invited by the Royal Society for the encouragement of Arts, Manufactures and Commerce to apply for Fellowship. . . . . . . To contact me 'off blog' either find me on Facebook or email me at jscossham(at)gmail(dot)com