skip to main | skip to sidebar

A much more relaxing day than yesterday. I was woken up at 8 to cut my youngest son's fingernails, and I came down for breakfast and went on the computer for half an hour but went back to bed and slept til 1pm... I must have needed it.

I felt a lot better for that and had a positive day, despite not getting my website work done again! I have set myself a deadline though.

But I did do some website work... I got Gill to take a head and shoulders photo of me, which I think looks sober enough for the intended use. 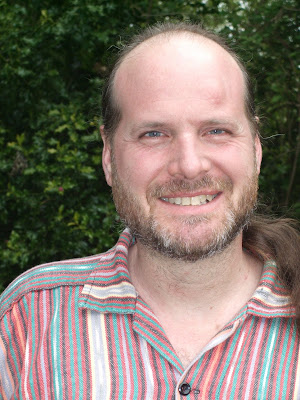 I did assorted jobs in the house until our eldest got home, then cycled down to Country Fresh and Alligator to do my compost pick ups. I took a photo of my mate Richard outside his shop (ok, his brother's shop!): 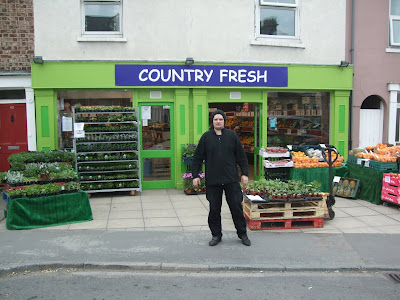 Then I went to the Cemetery to take some photos for the website... and got there just as it closed at 4.30. What bad timing... I didn't know it shut so early.

I'll have to try to fit in a visit there over the weekend.

I spent an hour in the garden and at 6pm, Vicky came round. I'd advertised the RHS Plantfinder book on Freecycle... my lovely Auntie had given it to me, but I've no space on the bookshelves and it's not really a book that I would use, as it's about all the different plant varieties and which nurseries stock them. I got about 6 replies, and one of them was Vicky, who is the Clerk of the Planning Panel, and she's just joined Freecycle, and said she would find the list of plants very useful for her work, which is helping an architect make the paper plans better, with landscape elements... including planting schemes.

So Vicky got the book... not the other very deserving enquirers. She said hello to the family and then had a wander down the garden. I gave her a couple of climbing pea bean plants, as she's just making a raised veg bed......

I had tea, a rice-based dish with chopped-up vegan hot dog sausages in, from Rakesh. I watched Gardener's World.

Then I went out again to feed a load of pruned-off branches through the shredder and put a woody layer on the current heap. Came in just before 10, as a facebook friend Sean, who organises the Manchester World Naked Cycle Ride said he'd be on TV, on 'Opinionated' which is a dire programme which I'll never watch again. It was a very brief interview anyway, no film or photos.

Enjoyed Jools Holland as usual, and the LCD Soundsystem, and chopped up another load of fruit for drying.
Posted by Compost John at 19:39

Translate this blog into your own language

Compost John
I am a very enthusiastic 'green' and am involved in a range of projects and community groups which are directly connected with sustainability. These include the Green Party, York in Transition, St Nicholas Fields , Frack-Free York, The World Naked Bike Ride, Alternatives to Violence Project, and others. . . . . . . . . . I am happily married with two children, and am unconventional and a free thinker, with a very tolerant wife! . . . . . . . . . I work as an entertainer, 'Professor Fiddlesticks' teaching circus skills and making people happy, since 1992. see wwww.professorfiddlesticks.co.uk . . . . . . . . A few years ago, I wrote a blog and column for Community Care, see www.communitycare.co.uk/blogs/green-living/ . . . . . . . .... In early 2010 I was invited by the Royal Society for the encouragement of Arts, Manufactures and Commerce to apply for Fellowship. . . . . . . To contact me 'off blog' either find me on Facebook or email me at jscossham(at)gmail(dot)com